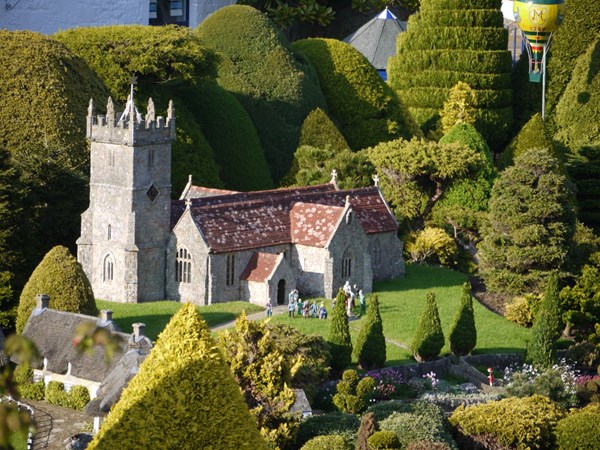 In his new book English Grounds: A Pastoral Journal, Andrew Rumsey takes the reader on an exploration of faith, place and identity. In this extract, he ventures beyond his native Wiltshire and finds himself at a model village, on the Isle of Wight.

In the model village at Godshill, Isle of Wight, a Christening. Parents and elderly parson assemble outside, while an invisible congregation sings (for some reason) Abide With Me – pointed to the skies, where the life-sized All Saints looms above, massive in comparison. Setting aside images from the final scenes of Hot Fuzz – which take place in a similar setting and with an eye-watering denouement involving the church spire – we count four such Russian-dolled reproductions, the smallest an approximate blotch with a tower like a stock cube.

This place is all about a sense of scale, if not proportion: our fascination for creating miniature versions of reality that are, inevitably, somewhat slower to change than their animated originals. In his sparkling 1998 satire England, England, Julian Barnes imagined the entire Isle of Wight becoming annexed and developed as a theme park of archetypal Englishness – Robin Hood, Stonehenge, Anne Hathaway’s Cottage – a project that founders, hilariously, on the hubris and chaos of human behaviour when extracted from its natural habitat. Christian heritage haunts the novel: towards the end, its central character, Martha Cochrane, finds herself in an abandoned medieval church on the island, pondering the faith of those buried nearby and her own, growing desire for authenticity. Having rejected as a lie the imposed Christianity of her childhood, she nevertheless feels a sense of cultural bereavement – ‘a discontent with the thinness of life’ – reflecting:

An individual’s loss of faith and a nation’s loss of faith, aren’t they much the same? Look what happened to England. Old England. It stopped believing in things. Oh, it still muddled along. It did OK. But it lost seriousness.

The problem, she considers, is that the vocabulary of Christian belief no longer answers that continuing need: ‘the words don’t seem to fit the thoughts nowadays’. Words – and their meaningful translation – have been the basic missionary challenge for the church since its inception, however acutely this has been felt during Christendom’s long recession. When its words no longer fit the culture, the church generally faces two temptations: to settle in an artificial past when they did, or create an alternative present where they do.

Both nostalgia and sectarianism are a manipulation – an imaginative denial – of time and space: creating worlds within a world, microcosms of how life might or ought to be. All groups do this to some degree, in order to foster community and shared values – and how we need them! Growing up, I found in evangelical subculture a refuge, somewhere to belong – offering as it did a kind of nursery garden for young believers. The test of authenticity, of maturity, is how these relate to life outside the model village: how, in other words, we love a world unlike our own. As with nations, the Church runs into danger when it becomes an island entire unto itself, growing an exaggerated, aberrant view of its own ideal and unassailable home.

Plump as a row of hassocks, the cottages leading up to All Saints, Godshill form (Pevsner comments) ‘one of the Isle of Wight’s picture postcard motifs’, noting that ‘the village has become a show village and not without reason’. Such appealing thatchiness presents a challenge, suggesting that the parish is some sort of replica. Yet on the wall of the church’s south chapel is painted a unique and mysterious depiction of Jesus: crucified on a flourishing three-boughed plant, thought to be a lily. ‘The lily cross’, dating from the mid-fifteenth century and discovered in 1835, finds Christ slimly suspended in the tangle of nature, as though he were another wayward limb.

It seems probable that this commemorates the rare calendrical occurrence when Good Friday coincides with the Feast of the Annunciation (the lily being a symbol of the Virgin Mary) – abridging the Incarnation in a single day. One old rhyme runs:

When the Lord’s Day falls in Our Lady’s lap, England shall meet with a great mishap.

While it may be past, this intertwining of our nation’s fate and faith was not some conceit, but a genuine thing – and if the Church, in age, is to bud again, it must be rooted in the same, nameable spot.

Andrew Rumsey is Bishop of Ramsbury and lives in Wiltshire.

English Grounds is available to order now, via our website.