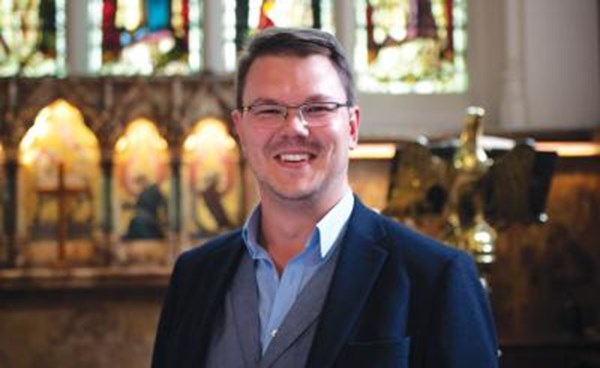 Faithful Living: Discipleship, Creed and Ethics considers the formational impact worship can have on Christian ethics, and therefore on the lives of Christian disciples. Its author, Michael Leyden, spoke with David Shervington, Senior Commissioning Editor.

So, Michael, can you tell us a bit about who you are, what you do and how you got here?

Well, I am currently Director of St Mellitus College, North West, based in Liverpool. I was previously a parish priest in Liverpool Diocese and latterly Chester Diocese, but I’ve been full-time at College since 2018 when I was appointed as Director. I try to remain rooted in the life of local church as Associate Minister at St Peter’s at the Cross in Chester – a church plant into a medieval building at the cross-roads in the city centre. My work explores the interface of doctrine and ethics to equip Christians to live as faithful disciples of Jesus Christ today. It’s been on my mind for a while. I think the foundations were laid through my PhD research on human responsibility in Karl Barth’s moral theology. Barth drew extensively on doctrine to think about ethics and attended carefully to practises like prayer and worship to resource discipleship. I have been trying to do something similar as a priest and as a teacher. Faithful Living represents some of my thinking about how to think about discipleship – but it is definitely not a book about Barth (or one in which he features very much!).

Why do you think we need another book on Christian ethics?

Ha! That sounds like something Solomon might say! (c.f. Ecclesiastes 12:12). I think part of the answer is that many books are written for the academy, and therefore the kinds of arguments they make are specialist and require a certain amount of expertise to follow. I have written Faithful Living in the hope it might be useful to thoughtful members of a local congregation as well as ordinands, undergraduates, church leaders, and priests. Whilst relevant academic texts and scholarly discussions are extensively referenced throughout the endnotes, the general thrust is intended to be more open and accessible. Further reading is provided at the end of each chapter and offer questions to generate discussion. The idea is to normalise thinking about ethics rather than limit it to experts.

Another part of the answer concerns substance. It is common to think of ethics as focused on moral quandaries or dilemmas, what the theologian Michael Banner calls “hard cases”, like abortion or euthanasia or war. Whilst those things do matter, one of the points I make in the first chapter of Faithful Living is that life is much more than a series of ethical crises. Instead, I try to imagine what kinds of decisions and actions are implied for people who believe the things that Christians believe and do the things that Christians do. This means reversing the usual pattern, and rather than beginning with the quandary and using Christianity to resource the response, I start with our faith commitments and then consider what they imply for our behaviours. So, each chapter of Living Faithfully begins with an overview of the theological substance of each clause of the Creed before considering its implications for ethics..

You frame the whole book around the Nicene Creed – what led you to that approach?

I suppose because, like many aspects of liturgy and worship, it’s not been included in ethical discourse much before and that seemed like an oversight. I started wondering about the significance of texts like the Nicene Creed about ten years ago when I was teaching ordinands theological ethics at the same time as being a parish priest in Liverpool Diocese. It is so well known to many Christians from a wide range of denominations because of its place in worship, yet so overlooked as a resource for ethics and moral reasoning. And I think, however subliminally, it shapes our identity as the people who believe these particular things about God by helping us to confess and bear witness to the gospel. With that in mind, I take it to be basically true that whatever we believe about God always implicates us as God’s people. So, the step from explicating the identity-conferring nature of the Creed to exploring its impact on our moral imaginations did not seem like a huge one. I have been experimenting with different clauses in lectures on ethics and have used the Creed for sermon series’ with discussion groups in parish. The book is, in part, the fruit of that experimentation and exploration.

You and I have chatted in the past about the need to link our liturgy, of which the Creed is a key part, much more explicitly to our theology, doctrine and our lived practice. Why do you think that matters?

Yes. I do enjoy our conversations! Principally, for me, it’s that in worship the theological rubber hits the real-life road. In worship we gather as God’s people, to hear and receive afresh the gospel and to encounter Jesus Christ in word and sacrament, all in the context of the holy community. Worship is thus a place of real theological significance. It’s precisely why Anglicans, like me, do not usually have a separate doctrinal basis or theological statement of beliefs – our liturgy is the carrier of our theology: as the ancients used to say, lex credendi, lex orandi, or “we believe what we pray and we pray what we believe”. I suppose Faithful Living is my initial exploration of what it might mean to formally add lex vivendi to that statement so that “we live what we believe and pray”. It matters because, when we gather, we are still ourselves before God (however much we might not want that to be true). We still bring with us the real life we lead outside of worship, with all of its demands and opportunities. It’s something I reckon with in the final chapter, ‘Communion of Saints and Forgiveness of Sins: The Church and Practical Catechesis’, offering some reflections for priests and church leaders on discipleship and formation through worship. It seems to me that discipleship is concerned more with the wider context than with what happens on Sunday mornings (if for no other reason than weight of numbers – we spend more time outside church meetings than in them…hopefully!), and so ensuring some meaningful connection between the spaces we set aside to encounter God in community and the rest of our time will contribute towards who we are becoming as followers of Jesus, or, as I call it in the book, an ‘integrated ethics of discipleship’.

You advocate something you refer to as ‘ethics by implication’ where ethics is governed by the question ‘what kinds of lifestyle choices, decisions, and actions might be implied for contemporary disciples by the theological substance of the Christian faith?’. How would you respond to someone who might suggest this approach to ethics could easily turn into a kind of moral relativism, depending on a person’s theological position?

Yes, well, I think my approach is susceptible to that criticism. But, I think I take it to be basic common sense that what we believe will influence the decisions and actions we take. That’s why I favour the idea of implication rather than imposition or command. In reasoning from what we believe there is still a journey to make towards how we instantiate those beliefs. So, for example, believing that the Triune God is the creator of human and non-human animals alike does not tell us anything directly about what decisions and actions we should take. Some further work must be done. But it does suggest that we consider our decisions and actions towards non-human animals in the light of God’s creative purposes for them. As I argue in chapter 3, ‘Maker of Heaven and Earth: Consuming our Fellow Creatures’, it will have direct implications for our dietary decisions, shopping habits, even fashion choices, as well as institutional policies about canteen menus. A similar principle is at work with regard to political participation and the Lordship of Christ, or the humanity of Jesus and our support of people with disabilities, or the reality of community and the complexity of corporate decision-making. The list goes on. Our theological commitments do shape our ethics, and in Faithful Living I am trying to think through the journey from the what to the how..

My hope is that, in choosing an official Ecumenical document of the Church, the platform from which I work is as Christian as possible, generous in its reach but orthodox in its application. To that extent I hope the charge of relativism is diminished or properly placed in relation to the theological claims of the Creeds rather than the ethics. I am not advocating moral relativism, but I am advocating a morality which is anchored in orthodox Christian faith, and so I am quite excited about the potential for robust discussion not only about the ethics of my approach but, perhaps more importantly, the underlying theological assumptions I make in choosing the Nicene Creed.

What’s your hope for the book? What kind of a difference do you want it to make?

I’d like Faithful Living to be helpful in stimulating and resourcing a conversation for ordinary Christians about the way in which what we do on Sundays encourages and enables us to live as disciples of Christ the rest of the time. I really want it to help form and shape ordinands, church leaders, pastors, and priests and give them confidence to make connections between what we affirm when we gather together for worship, and the decisions and actions that face us the rest of the time.

Living Faithfully: Discipleship, Creed and Ethics is published later this month, and available to pre-order at a pre-publication discount.