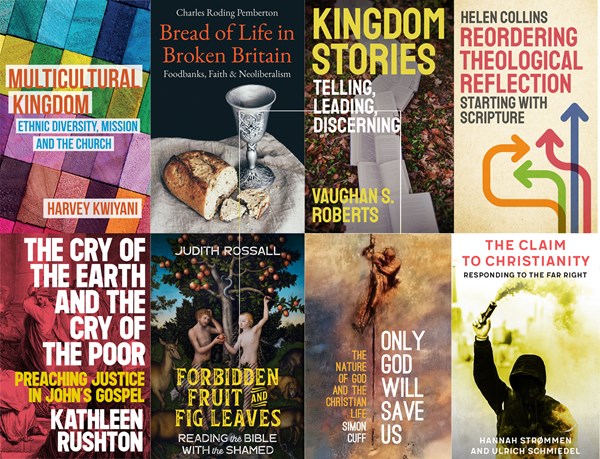 Here’s a snapshot of what is coming in the next few months.

The honest truth is that churches in the UK are still predominantly monocultural. As Harvey Kwiyani puts it, "It is the folly of our time that we have reasons to justify segregating
churches." And yet, as he argues in Multicultural Kingdom, Ethnic Diversity, Mission and the Church, multiculturalism is a theological imperative and a biblical necessity. Kirsteen Kim comments that the book is “Highly recommended for all who wish to engage in authentic mission and experience the multicultural kingdom today."

Foodbanks are coming under pressure like never before. At the same time, the return of Christian social service to the centre of British political life through the emergence of the foodbank movement has elicited a range of ecclesial responses. But, says Charles Rodin Pemberton in Bread of Life in Broken Britain: Foodbanks, Faith and Neoliberalism, in their urgency and brevity these Church responses often fall short. As Anthony Reddie says “Foodbanks, Faith and Neoliberalism provides a carefully calibrated account of the political and economic terrain that has given rise to Foodbanks and provides constructive resources that will inform the theology and practice all those hoping that they can make a difference."

Vaughan S. Roberts and David Sims’ co-authored book Leading by Story was much praised when it was published a few years ago. Now Roberts has written a follow-up, Kingdom Stories: Telling, Leading, Discerning, in which he demonstrates in a really practical way how a more qualitative, story-led approach to thinking about leadership can offer a valuable perspective on ministry for both individuals and churches. James Woodward describes it as “an extraordinarily generative book…well organised, lucidly written, creatively researched”

Theological reflection is a fundamental part of formation for ministry, and crucial as a means of processing, evaluating and growing in discipleship. In some traditions the bible is already a natural starting point, and models of theological reflection which start in other places can be hard to swallow. Helen Collins’ book Reordering Theological Reflection: Starting from Scripture demonstrates the possibilities which result from using scripture as the launchpad for reflection. Pete Ward considers the book to be “an important contribution to the developing conversation around this vital area.”

The Gospel of John can often feel strange, irrelevant, and in a world of its own. Yet as Kathleen Rushton reminds us in The Cry of the Earth and the Cry of the Poor: Hearing Justice in John’s Gospel if you look hard enough you’ll find within it an urgent call to hear the voices of the oppressed in our world. Structured around the 3-year lectionary readings, and drawing on the practice of lectio divina, Rushton guides us through the gospel with a focus not only on contemplation but also on action. As Robert J. Karris puts it “This book will grab your conscience, warm your heart, and impel you into the world to complete God's works”.

It’s often argued that Christian theology has concentrated too much on issues around guilt and the needs of the perpetrator of sin, but ignored the strong biblical theme of shame and the needs of the sinned-against. Judith Rossall seeks to address this lack in Forbidden Fruit and Fig Leaves: Reading the Bible with the Shamed. Tracing the theme of shame through scripture from creation to the cross offers a reading of scripture with a deeply pastoral heart.

In The Claim to Christianity: Responding to the Far Right Ulrich Schmiedel and Hannah Strømmen examine the theologies that emerge in the far right across Europe, concentrating on Norway, Germany and Great Britain. They explore how churches in these three countries have been complicit, complacent or critical of the far right, sometimes intentionally and sometimes unintentionally. Ultimately they issue a challenge to churches – take the challenge of the far right seriously, or risk being tacitly responsible for its continued rise.

God’s being gives meaning to God’s action”. So said Gustavo Gutiérrez. If we grasp what it means to say that God is just, we learn what justice really looks like. If we understand how divine anger works, we understand how we can be fruitfully angry. An accessible introduction to the doctrine of God, Simon Cuff’s Only God Will Save Us: The Nature of God and the Christian Life demonstrates for students, ordinands and Christian practitioners how a theological articulation of the nature of God can drive and refine Christian action in the world.

All these titles are available to preorder now. For details on how to order, click here