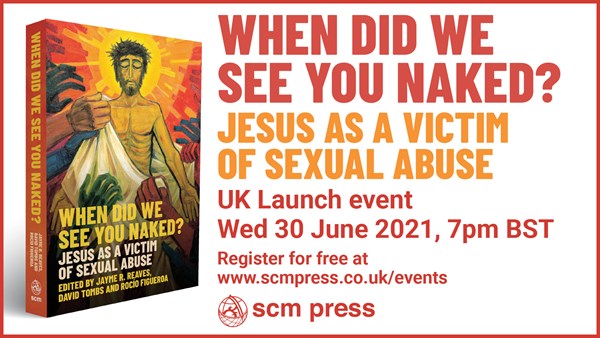 Jayme Reaves talks to David Tombs about Jesus as a victim of sexual abuse and why this matters. (CW: Sexual violence)

Jayme: Can you start with a little bit about yourself and where you live and work?

David: I am originally from the UK and my first academic post was in Theology and Religious Studies at the University of Roehampton, London. I moved to Belfast in 2001 and taught on a new Master’s programme on reconciliation studies for the Irish School of Ecumenics, Trinity College Dublin. I later became the Director of Trinity’s Centre for Post-Conflict Justice. I came to New Zealand in 2015, as Director of the Centre for Theology and Public issues at the University of Otago.

J: What drew you to this area of research and writing?

D: My interests in Latin American liberation theology first drew me to this work in the 1990s. I was particularly interested in how Latin American liberation theologians used lived experience and struggles for justice in Latin America to interpret the Bible. Critics sometimes objected to this approach; saying that it read its interpretation into the bible from the social and political context, rather than taking the biblical text seriously in its own right. Liberation theologians responded that this criticism was unfair for at least two reasons. First, all readings are likely to reflect the current context and associated assumptions of the reader. Readings that do not see the struggle for justice as important are just as contextual as those that do. Second, liberation theology readings do not seek to prioritise context over the text. The intention is to examine the text in light of a relevant context. This is not to project meaning into the text from the outside, but to be attentive to details that might be important in the text but that are typically overlooked in other approaches.

In seeking to better understand the context and lived experience of reading the Bible in this way in Central America, I read testimonies of human rights abuses that had been committed during times of political conflict. When I was working on my PhD, I read a report of a sexualised execution of a woman in El Salvador. As I read further, I learned about sexual violence against both women and men during the counter-insurgencies in Central America in the 1980s. Torture reports from other Latin American countries in the 1970s and 1980s showed that sexual violence was common in tortures used against both women and men. The frequency of sexual violence in torture centres is best understood in terms of sexual violence being a tool to humiliate the victim, rather than a source of sexual gratification for the torturer.

The abuse of the immediate victim also served as a powerful warning for the wider society. It showed everyone what those in power could do. As I read further, I also became more aware that even though the sexual violence of torture was well-known in some ways, it carried a stigma and was often accompanied by a silence. Even in the Salvadoran Truth Commission (1993) there was a reluctance to talk about sexual violence directly, or to name it clearly.

The opportunity to present a conference paper on biblical interpretation in liberation theology (July 1998) was my first chance to bring these two interests together. My initial proposal had been for an assessment of interpretative approaches used by Latin American liberation theology between the 1960s and 1990s. Instead, I wrote the paper on how attention to Latin American torture reports could help towards a reading of Jesus’ experience of sexual abuse during his stripping and crucifixion.

The central argument was that this was not reading sexual abuse into the text, but was using relevant resources, including a number of historical sources, to see what is genuinely present in the text but is often missed in other readings which are unfamiliar with torture practices. The repeated stripping of Jesus as punitive sexual humiliation is explicit in the text and should be named as sexual abuse. There is also a further possibility that there might be other sexual assault as well. Given what happens in detention with disturbing regularity, torture reports raise questions about a possible silence in the Biblical text. We cannot answer this further question with certainty, but we can do more to acknowledge that this question exists.

The conference presentation was published as a journal article in Union Seminary Quarterly Review (1999).[i] and an abridged version of it serves as Chapter 1 for the book. I have been interested in these questions ever since.

J: Why do you see the questions raised by the book as important? Why does it matter?

D: Different contributors offer a range of answers to this and explore issues which are significant for both church and wider society. The chapter that Rocío Figueroa and I have contributed (Ch 17) looks at survivor perspectives.[ii] One of the messages we discuss in this chapter is that survivors saw Jesus’ experience as important for the whole church and not just for survivors. I think they are correct and more work needs to be done on this. The importance for the wider church might be considered in at least three areas.

First, what is recorded in the text matters. The text in Mark 15 and Matthew 27 is clear and explicit that Jesus was repeatedly stripped in a humiliating mockery involving about 500 soldiers, and then displayed naked during crucifixion to die in front of a hostile crowd. Recognising this, and using the honest language of ‘sexual abuse’, might make a difference to how we think about the text and how we think about Jesus.

Second, recognising sexual abuse matters. In comparison to when the conference paper was presented over twenty years ago, there is now much greater public awareness of sexual abuse as a widespread problem in society and in churches. There is also more awareness that sexual abuses can sometimes be hidden in plain sight. The evidence, which should give cause for concern, is often minimised or dismissed as unimportant. Abusers can readily take advantage of this to continue their abuse. Recognising the stripping of Jesus as sexual abuse shows how easy it is to miss clear evidence of sexual abuse, even when the evidence should be obvious and in plain sight. The churches, and especially church leaders, and anyone involved in safeguarding, can take lessons from how the sexual abuse of Jesus has gone unrecognised and unacknowledged for so long.

Third, responding to sexual abuse matters. In many conversations about the work over the years there has been strong resistance to thinking of Jesus as a victim of sexual abuse. The reasons for this are varied, but often there has been a sense that shame and stigma would attach to Jesus if he is seen in this way. Discussing Jesus’ experience of abuse often surfaces these negative attitudes. The work gives churches a good opportunity to explore and challenge the assumptions behind these harmful perceptions.

A good way to explore responses with groups is through the contextual Bible study developed by the Ujamaa Centre at the University of KwaZulu-Natal, South Africa. The book includes a chapter by Gerald West which describes this bible study.[iii] I hope people will want to read it—and read the other chapters in the book—for themselves. We know that people have different responses to the questions raised, and it is good to talk about these and hear different contriubtions.

When did we see you Naked is out now and available via our website.

Jayme Reaves and David Tombs will join fellow book editor Rocio Figueroa, along with Mitzi J. Smith and Anthony Reddie for the launch of 'When Did We See You Naked?' on 30th June 2021. Tickets are FREE and still available here

Dr Jayme R. Reaves is a public theologian and Co-ordinator at the Centre for Encountering the Bible at Sarum College, UK. Originally from the American South, she has worked in post-conflict former Yugoslavia and Northern Ireland and focuses on bridging the gap between theology, peacemaking, and reconciliation. David Tombs is Director of the Centre for Theology and Public Issues at the University of Otago. His article with Katie Edwards "#HimToo - why Jesus should be recognised as a victim of sexual violence" for The Conversation received over 20,000 views in two days and generated media coverage around the world.