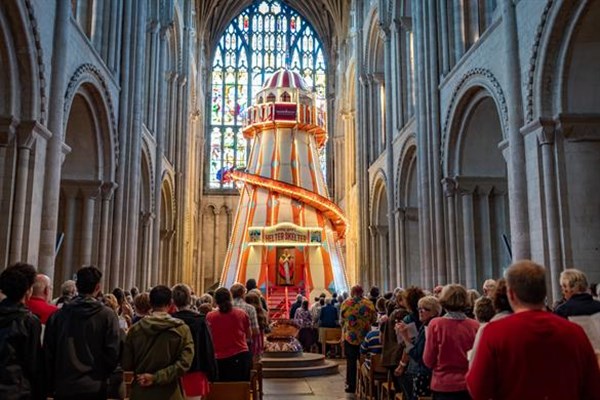 How should we think about cathedrals? Are they magnets? Common spaces? Beacons? At a time of increasing interest in the mission and ministry of cathedrals, Judith Muskett introduces us to her forthcoming book Shop Window, Flagship, Common Ground: Metaphor in Cathedral and Congregation Studies.

In recent months, cathedrals have captured headlines in the mainstream news, but not always for the best reasons.  In August, Rochester and Norwich Cathedrals sparked controversy with what the press dubbed their ‘novelty attractions’.  In Holy Week, photos and accounts of the devastating fire at Notre Dame in Paris dominated the news for several days.

At Rochester Cathedral, the centrepiece of ‘Building Bridges’, a theme running through the summer months, was a nine-hole bridge-themed crazy golf course in the nave.  Rachel Phillips, Canon for Mission and Growth said: ‘We hope that, while playing adventure golf, visitors will reflect on the bridges that need to be built in their own lives and in our world today’.

At Norwich Cathedral, a 55-foot helter skelter was one aspect of a ten-day ‘Seeing it Differently’ project, which aimed to give visitors the opportunity to experience the cathedral in a new way and open up conversations about faith.  Visitors climbing up to take a £2 ride on the helter skelter were treated to unique views of the cathedral and of the biblical scenes on its famous roof bosses.  Andy Bryant, Canon for Mission and Pastoral Care explained that the helter skelter was ‘playful in its intent but also profoundly missional’.  He continued: ‘By its sheer size and grandeur it speaks of the things of God; it points beyond itself.  Its sheer presence helps to keep the rumour of God alive and plays its part in passing on the story of salvation’.

In the Daily Telegraph, Tim Stanley criticized such justifications for these ‘distractions’.  He argued that Christian clerics ‘are making the faith look ridiculous’; and he suggested that ‘we’re doomed’ when the world starts laughing at us – standing for nothing – ‘just bricks and mortar with a fun fair inside’.  It was the ‘fun’ in the outreach initiatives that attracted particular attention; and in some media the Archbishop of Canterbury was mocked for claiming at last year’s National Cathedrals Conference that ‘if you can’t have fun in a cathedral, you don’t know what fun is’.

Notably, Rochester saw a doubling of visitor numbers once the mini-golf course was set up, with between 250 and 300 young people coming in every day, as the Dean, the Very Revd Philip Hesketh, told the BBC.  Moreover, golfers engaged with the calls in the cathedral each day between 12 noon and 3 p.m. to pause and pray; Saturday Evensong was transformed; and more candles were lit than usual.

A comment piece in the Church Times suggested that ‘if chapters decide to be adventurous, they do need to take into their reckoning the flak that adventures may attract’; and the writer called for ‘deeper reflection on the theology and ecclesiology implied by secular activities in church in the current social context’.

Earlier this year, popular reactions to the devastating fire at Notre Dame in Paris caused many commentators to reflect on the symbolic power and significance of cathedral buildings.  Just like the famous photograph of St Paul’s Cathedral standing intact while everything around it burned on the night of 29th December 1940 during the London Blitz, photographs of Notre Dame ablaze served as a potent reminder that ‘some buildings embody a powerful feeling of shared identity and emotion’, according to a leader writer in The Times.

The blaze at Notre Dame prompted Greta Thunberg, the 16-year-old Swedish climate activist, to coin the phrase ‘cathedral thinking’ in her speech the same week to the Environment Committee of the European Parliament.  For her, the notion of ‘cathedral thinking’ captured the far-reaching vision and courage required to tackle the climate change emergency.  Just as there was an instant response to the cathedral fire, with the offer of significant funds towards its restoration and rapid action by the French government to put in place a process for considering how best to restore it, she argued that similar decisive action and leadership is required to combat global warming.

Shop-window, Flagship, Common Groundengages in some ‘cathedral thinking’ of its own: it thinks about the rich ministry and increasingly innovative mission of cathedrals and it offers comparative insights on cathedrals and cathedral-like churches.  As the book title suggests, metaphor is the chosen lens through which to view the role of cathedrals in contemporary life.

Here are five possible ways of thinking about the roles of cathedrals and cathedral-like churches, which the book discusses.

Shop-window, Flagship, Common Ground not only explores the inferences of these and many other metaphors, it also illustrates how metaphors can stimulate different types of research about the function of cathedral and church buildings.  With a foreword by Professor Grace Davie, the book suggests that cathedrals and the cathedral-like greater and major parish churches have a significant role in the theory of ‘vicarious religion’, helping to acquaint the passive majority with the religion practiced by the active minority.

In the penultimate chapter, the book turns the tables to think about the way the word ‘cathedral’ is used to shed light on other physical structures and a range of topics.

Judith A. Muskett is a Visiting Fellow in the School of Humanities, Religion and Philosophy at York St John University.

Shop window, flagship, common ground. Metaphor in cathedral and congregation studies is published in November in the SCM Research strand, and available to pre-order now.