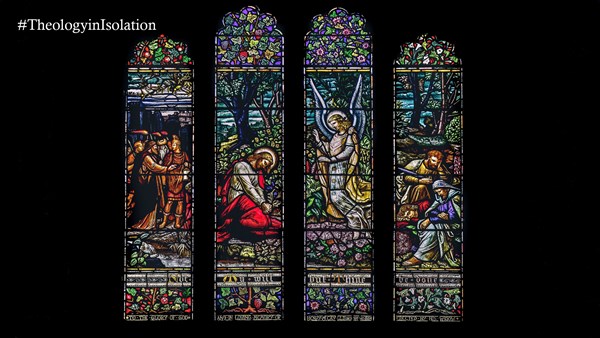 For Good Friday, Sanjee Perera reflects on our Gethsemane moment

I grew up amidst the Sri Lankan civil war; long term curfews, essential supply shortages, catalyst emergency and large scale death tolls were the norm. Seeing the Italian & Spanish images of seeming endless ranks of Corvid-19 coffins brought it all back, that fresh taste of a familiar anguish.

I was in nursery school when my world caught on fire the first time; the first of the Tamil pogroms had hurtled into the heart of Wellawatta, where my primary school was situated. The school van had left without me, and I tasted the acrid taste of tears & terror that seared the first schema of fear in my mind. In part curiosity and part distress, I had trespassed out of the school gates to the smoke and lamentation, and the chaos engulfed me.  My infant school grasp of the bible was by rote, but I fumbled on to what seemed an appropriate aphorism, one that has become a reoccurring chorus these latter years; ‘Father take this cup away’. A pristine nun, one of the teachers of my primary school scooped me up and took me back inside the safety of the convent-school. By a Mariannic grotto with a gurgling fountain, she explained, ‘when bad things happen, it is best to be in the garden’; a ridiculous instruction, I recalled later in my teen years.

Then came the curfews, the consequences of a blood soaked civil war unfolded around us like a kaleidoscopic theatre set, framing and shaping us, but not quite breaking the skin of our childhood wellbeing. The adult world worried and whimpered, the vulnerable and poverty stricken shattered & starved, the scapegoated were burnt out of hearth & home, but we thought the war was ‘in the North’, we thought it didn’t affect us; we were still dreaming of Arcadia.

And then one grim, gruesome school day, as we capered with all the privileges that ignorance, youth & affluence afforded, in our exquisitely landscaped, orchid encrusted private school fortress, the blue skies blotted in a scorched black hole of ash and burnt flesh; the first bomb-blast to pierce the membrane of my cocooned slumber. The cold fingers of fear groped the back of my neck, and the ancient heritage trees of our chapel gardens wept crimson blood on our white cotton uniforms. The bodies of personnel from the Joint Operations Command next door, bordering the chapel garden, were strewn on the elegant trees like banners on the Holy Rood. Arcadia had shattered and I had awoken in Gethsemane.

A few close call bomb blasts later, when I had almost been lulled back to the illusion that I would be untouched by this desolation, that I was resilient, came another sorrow. When I heard my best friend was missing, I prayed like many hundreds of others who hoped that their loved ones would return home, that it was a mistake, this trail of broken bodies laid out covered in white sheets. These grey bloodied carcases bore no resemblance to the warm hands and enigmatic faces we knew. I prayed again, ‘Father, take this cup of sorrow away’.

After the funeral, so many offered the empty tokens of Arcadia; time would heal, the pain would grow dim, life would go on, and I would forget. Clergy & laity alike chorused theologically suspect Greco-Roman and Pagan clichés; ‘heaven needed another angel’; ‘those that Gods love best…’; I smiled, nodded and raged as teenagers do. And my shallow immature trauma theology blasphemed; Christ’s crucifixion was all well and good, but did he live with such anguish? Did he have to live with loss & death?

At university I abandoned Theology halfway through, it didn’t satisfy my questions of theodicy. I turned to Moral Psychology and Socio-economic systems instead; seeking solace in Piaget, Kohlberg & Kant. Terror & suffering existed because of selfish and defective group-think, flawed socio-economies and impaired moral judgement. Eden could be mimicked if not restored if only we were kinder, gentler, if compassion & reason ruled self-interest and the redactions of cognitive economy. ‘White Theology’, a theology increasingly borne of a smug Arcadian dream seemed alien, seemed to idolise this God of the oppressor, of a sleeping tribe. Cone[1] came to my rescue, and a catalyst of liberation theologians followed, as the tidal waves of sorrow raged and the anguish of the ages came lamenting to my door. I found solace in Black lamentation literature & theology, and I, in my ignorance & arrogance prayed for an ecclesiological awakening, that my slumbering Church might be aroused to Gethsemane. I prayed, Lord if only we understood the anguish of the refugee and the rape victim, the homeless & hungry, the marginalised and the abused. I prayed for a paradigm changing breaking of the shell of our understanding, blind to what it might cost.

And now as we awake in this olive grove, and death stalks us like a night terror from antiquity, we are in the midst of Gethsemane, bracing ourselves for a tidal wave of death. Death who we have only seen at the periphery of our vision before, suffering that was only an abstract concept on a far of continent before, is now being measured and projected and analysed every hour on the hour on our TV screens to a frozen and captive audience. Death like we have never imagined before in our life time; anguish and insecurity that all the strategies of economic systems & social policy, constructivism & resilience management can ever redeem us from.  All my years of investment in cognitive catalyst models, trauma theory and developmental psychology seem insufficient, just now. Only a wounded healer can intervene, console, redeem; only a broken body mangled by death can speak to our anguish. Bonhoeffer[2], held that this anguish, isolation and abandonment is the cross laid on discipleship. Rationalising the inscrutable semantics of Divine Will, and the tension between the fall & the rapture is futile; theologising suffering within causality, logic or rationale is both damaging and blasphemous. As Tolkien, so vividly voiced by Sir Ian McLellan, posits in full technicolour, ‘All we have to decide is what to do with the time that is given us’.

As Balthasar[3] might have it, we are journeying into the very heart of Holy Saturday, where we might share in the anguish of the passion of the extended agony, of ‘the eternal openness of Christ’s mortal wounds’, that Pascal[4] holds, torments to the end of days. Today as we near 100,000 confirmed Corvid 19 deaths globally, knowing only that it will get much worse before the storm abates, our fevered insomnia craves the sedative pastoral illusions of Arcadia. We project time lines and dates to when ‘normalcy’ might return, when we might indulge in favourite recreations and gratify our deprived senses after this anomaly. We pray in our distress that this bitter cup of sorrow be taken away, so that we might slumber on.

But I have tasted the emptiness of Arcadian dreams, and in Gethsemane is a wounded healer on his knees.

Dr. Sanjee Perera is a Cognitive psychologist and Research fellow, of the Edward Cadbury Centre for the Public Understanding of Religion, exploring ecclesiology & belonging, at the School of Philosophy, Theology & Religion in the University of Birmingham.  She is also an Associate fellow at the Centre for Trust, Peace and Social Relations at Coventry University.