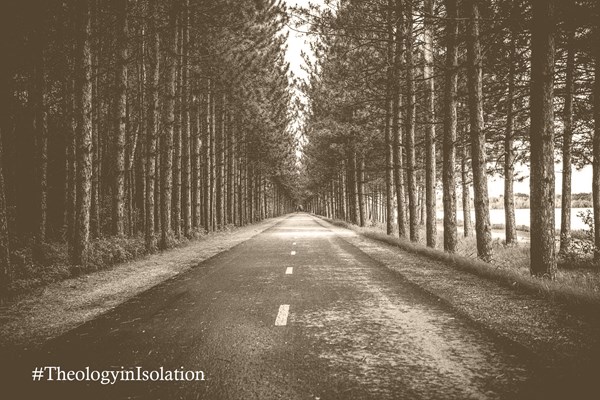 Dafydd Mills Daniel on love of God, love of neighbour, and everyday pilgrimage in a time of lockdown.

‘WWJD’? I remember first hearing that slogan – ‘What Would Jesus Do?’ – while living and studying in the US in the early 2000s.

The 19th century Liberal prime minister, William Gladstone, had his own version of that phrase (itself a 19th century creation) – although, in Gladstone’s case, the ‘J’ did not stand for Jesus, but Joseph Butler: the Anglican bishop, theologian, philosopher, celebrated in the 18th/19th centuries for his theory of conscience, and defence of revealed religion against deism.

As Gladstone put it: ‘I never take a step in life without thinking how Butler would have advised me’.

Even if (like me), you are an avid reader of Butler, I doubt you feel quite so strongly as Gladstone (he did, after all, produce an edition of Butler’s works). However, there is a phrase in Butler that I turn to often in my university teaching and research, which seems pertinent as we confront covid-19.

Responding to the controversy between two 17th century French bishops, Bossuet and Fenelon, about whether you should love God even if doing so leads to self-annihilation, Butler insisted:

‘the question, whether we ought to love God for his sake or for our own…[is] a mere mistake in language’ (Sermon 13, Fifteen Sermons).

The quotation comes from a group of four sermons: two entitled ‘Upon the Love of Neighbour’ and two ‘Upon the Love of God’. Read together, it is clear that Butler thinks that there is no conflict between all parts of the double love command (Matthew 22: 34-40). That is, for Butler, the authentic love of God itself includes authentic love of neighbour and self, and vice versa.

Butler might think it ‘mistaken’ to question where the emphasis lies when obeying the command to love – but it is certainly a pressing question at the moment.

How do we love our neighbour when we are cut off from them? Can we be sure that it is love of neighbour that motivates our self-isolation instead of self-love –a fear not primarily of being agents of harm to our neighbour, but of being made ill by them? And, whether we are acting principally for ourselves or our neighbour, where does love of God feature – are we prioritising this-worldly concerns for physical health over other-worldly spiritual devotion?

I am sure you have seen the final question raised in response to the closure of public places of worship. If not, see, for example, news stories from Greece, and articles by Peter Hitchens and others in First Things.

If, following the double love command, we are to love God with all our heart, then that love entails the duty of worship – and it is not exactly uncommon for Christians to have accepted suffering, if not martyrdom, in an effort to fulfil that duty. More than this, our failure to gather for worship, from fear of this-worldly harm, might be regarded as the symptom of a deeper problem: a lack of faith and hope, resulting in a lack of love. According to the theological virtues, agapeic love or Christian charity is only possible as life is lived in hope of a life to come with God, based on faith in the atonement.

I am not convinced by the above concerns, and would argue that one way of responding to them is to re-imagine pilgrimage.

Now, when I say re-imagine pilgrimage, I am principally saying adopt a Protestant (if not, more specifically, Lutheran) view of pilgrimage as (to adapt Max Weber) ‘everyday pilgrimage’.

For Luther, that other type of pilgrimage – the one about physical trips to particular places – was an offshoot of simony – a money-making scheme for the church – that also specialised religion and spirituality: it made them something just for special times and places, in trips organised by special kinds of people, rather than something possible for all people, in every humdrum moment of our lives. Thus, in ways particularly relevant at the moment, Luther described day-to-day family life (explicitly mentioning changing nappies!) and working to safeguard society as works of love, when performed as expressions of faith.

However, it is not just in Luther that we find ‘everyday pilgrimage’ themes – we also find them in well-known works about spiritual pilgrimage itself. Think of John Bunyan’s Pilgrim’s Progress, and the encounter with Talkative, where Faithful learns from Christian, ‘The soul of religion is the practic [sic] part’, and that ‘a work of grace’ is discoverable by ‘heart-holiness, family-holiness…conversation-holiness’.

Think also of Geoffrey Chaucer’s ‘Parson’s Tale’ and William Langland’s Piers Plowman, both from the 14th century, and the 16th century morality play, Everyman – each of which criticise simony, but also emphasise a private and individual, rather than simply institutional, responsibility for recognising that life itself is ‘pylgrymage’, and for committing ourselves to ordinary life as pilgrims. In Piers Plowman, it seems that stopping to plough Piers’ ‘half acre’ field is the pilgrimage, rather than a distraction from it. And, in Everyman, the pilgrimage of life is a ‘paynful’, ‘harde and daungerous [sic]’ ‘iournaye [jourmey]’ that ends in ‘Death’, at which point only our ‘good dedes [deeds]’ and ‘charyte’ will stay with us.

Of course, the category of ‘everyday pilgrimage’ is not tension-free.

Weber associated it with the rise of capitalism; and, by extension, the philosopher Charles Taylor has seen it as underpinning the rise of a secular society: ‘everyday pilgrimage’ encourages capitalism and secularisation by making the ‘ordinary’ and ‘profane’ aspects of our lives (for example, family and work) ‘holy’. Moreover, a ‘high’ sacramental theology, which emphasises (we might say) the physical presence of both the divine and the human, can point to the central role that Catholic penance (contrition, confession, and satisfaction) plays in Medieval works like Everyman.

But this is just to say ‘everyday pilgrimage’, like actual pilgrimage, is not an answer on its own – it would need, for example, to be part of a wider denominational re-imagining of ‘digital’ church services, participated in at a distance.

In the present crisis, ‘everyday pilgrimage’ is one way of thinking of all that we are doing (and not doing) each day to enact love to ourselves and others – a love of what is vulnerable – a love which is an expression of a love in God, of what he created, which is also a faith and hope in what will persevere within, just as much as above, a creation that is fragile.

And, if nothing else, ‘everyday pilgrimage’ lets us appreciate something of Butler’s point. For him (rather like Augustine, John Henry Newman, and Karl Barth), the command to love our neighbour as ourselves is a gracious dispensation from God – the golden rule allows us to understand that we have obligations to our fellow-creatures, and what that obligation looks like. At the same time, it takes account of human finitude, by commanding us to love all human beings, but allowing us to enact that love with those immediately around us. If social-distancing does halt covid-19, our decision to remain at a distance from those nearest to us will have helped stop the disease spreading to them, and to people we have never met. The current pandemic provides us with lived-experience of how enacting love for our nearest neighbour is also love for the neighbour furthest from us.