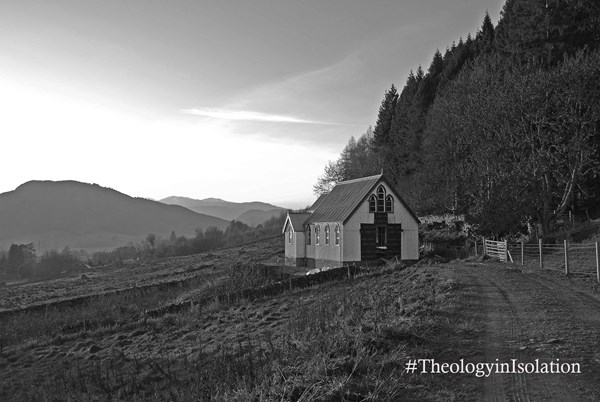 Melanie Harrington on how Elizabeth Melville's words offer a glimpse of hope in a time of exile.

I have recently come to the end of fourteen days self-isolation. As many of you will know, the time allows for a lot of thinking. For me, one thing which kept returning to mind was exile, and how I felt exiled by my isolation. Beginning with the book of Exodus and the desert experience of the children of Israel, to the experiences of exile documented in history; I’ve wondered what parallels there may be between our current experience during the coronavirus crisis and the experience of those who have encountered exile in the past, and whether those parallels might be helpful, or even comforting, in our attempts to process what is happening to us.

We are, it has seemed to me, in a kind of displaced exile: a physical separation from things we have no wish to be removed from. Ours is not a political exile, of course, but done for the sake of saving lives amidst a global pandemic. It has felt like an exile from friends, family, those we love and cherish, but I have also felt a kind of religious exile. Necessitated by the need for social-distancing, we are physically separated from our church buildings and communities. Thanks to video conferencing and social media we are finding amazing new ways of connecting with each other and worshiping together in order to meet this loss, but we are quite understandably still dealing with feelings of separation and a longing for return, perhaps akin to those felt in exile. Whilst what binds us together in communion with God is far bigger than our church buildings, place is still powerful. We are separated from our places of worship – our physical terra-firma in faith - not just the bricks and mortar but a sacred space in which we collectively encounter God, and have done, in some buildings, for centuries.

Elizabeth Melville understood well the feeling which underpin exile. She was born in or around 1575 in Fife, Scotland, and was the daughter of Christine Boswell and Sir James Melville of Halhill, a privy councillor and diplomat who had strong protestant allegiances. Elizabeth became a published devotional poet in 1603 with the spiritual homiletic poem ‘Ane Goldie Dreame’, but the majority of her work remains in manuscript. Melville’s ‘Dreame’ includes reference to her allegiances with the Presbyterian faction of the Scottish kirk, and this committed allegiance is further evident in the extant copies of her letters and poetry.

From the 1590s onwards, religious tensions in Scotland escalated as Presbyterians resisted the Episcopalian form of church governance which was being gradually introduced by James VI & I. In 1605, at the illegal Aberdeen General Assembly, many leading Presbyterian ministers and their supporters were arrested and either imprisoned or sent into exile. Elizabeth Melville’s letters and poems reveal her close contact with these excommunicated ministers and the important role she played in spiritually encouraging and supporting displaced Presbyterian communities during this time. They serve not only as valuable spiritual reflections on her relationship with God, but also as timeless meditations on how devotion can help us endure periods of suffering, loneliness and isolation.

In 1599 the protestant minister Alexander Hume dedicated his ‘Hymnes, or, Sacred Songs’ to Melville, who he described as a ‘sister’ in Christ and ‘a Ladie chosen of God to bee one of his saincts’. Hume praised her ‘compositiones so copious [meaning rich and abundant], so pregnant, so spirituall that I doubt not but it is the gift of God in you’, and ‘I vnfainedly confess, excelles any of your sexe in that art, that ever I hard within this nation.’ At a time when women’s religious writing was barely acknowledged, and their commitment to religion was measured more by obedience to orthodoxy than their theological thinking, his praise was significant indeed.

This powerful spiritual, homiletic voice can be found in the letters and poetry she sent to excommunicated Presbyterian ministers such as John Welsh, minister of Ayr. Welsh was amongst those dissenting ministers opposing James VI & I’s ecclesiastical reforms who were arrested at Aberdeen in 1605. He was accused of treason and sent to be imprisoned in Blackness. ‘A Sonnet sent to Blackness to Mr John Welsch’ (c.1606) speaks of Elizabeth’s pragmatic faith and enduring hope. It calls on him in his time of darkness and rallies him to bear his burden with courage, trust and hope.

Now it is dark thy sky cannot be clear
after the clouds it shall be calm anone
wait on his will whoos Blood hath Bo’t* ye dear
extoll his name tho outward joyes be gone.

Look to ye Lord thow art not left alone
since he is thine qt* pleasure canst thow take·
He is at hand and hears thy heavy groan
End out thy faught and suffer for his sake.”

Elizabeth’s words are consoling, yet rooted in a strong, confident, and formidable faith. She exhorts Welsh to take courage. Endurance and fortitude during his time of imprisonment are an affirmation of his commitment to Christ. Elizabeth encourages Welsh to ‘Look to ye Lord’. She recognises the pain of loneliness, and tells him that although isolated, ‘thow art not left alone.’ Christ would always be with him, will hear his ‘heavy groan,’ and understand the loneliness, discomfort and suffering he endures. Elizabeth reminds him that Christ, one who suffered alongside all our sufferings as he bore the cross, will be his constant companion, and source of comfort and empathy. She reminds Welsh that whilst he is currently in darkness, this will pass and the day will come when it will all be over, ‘after the clouds it shall be calm anone’, and he will see the ‘wished day appear’.

Many parallels have already been made by historians between our current crisis and times of plague in the past, but maybe there are other theological parallels to be found in history which can help us understand and endure our current situation. Throughout history people have experienced exile. It may not be the social-distancing exile we now find ourselves in, but they encountered the feelings of loneliness, dislocation and a longing for return which we feel, not only in our separation from our loved ones, but in our separation from the kind of profound encounter with God and each other which only occurs within our church buildings. Elizabeth Melville is little known, yet she is probably one of the most important religious writers in Renaissance Scotland. Her life and words afford a glimpse of a hope, fortitude and resilience embedded in a faith which saw not only herself but many others through times of turmoil, loneliness, suffering and separation. Perhaps now more than ever her words can help us, as we too trust that this will all pass, and there will come ‘A sight most Bright thy soul shall shortly see.’

Melanie Harrington is a priest, writer and researcher