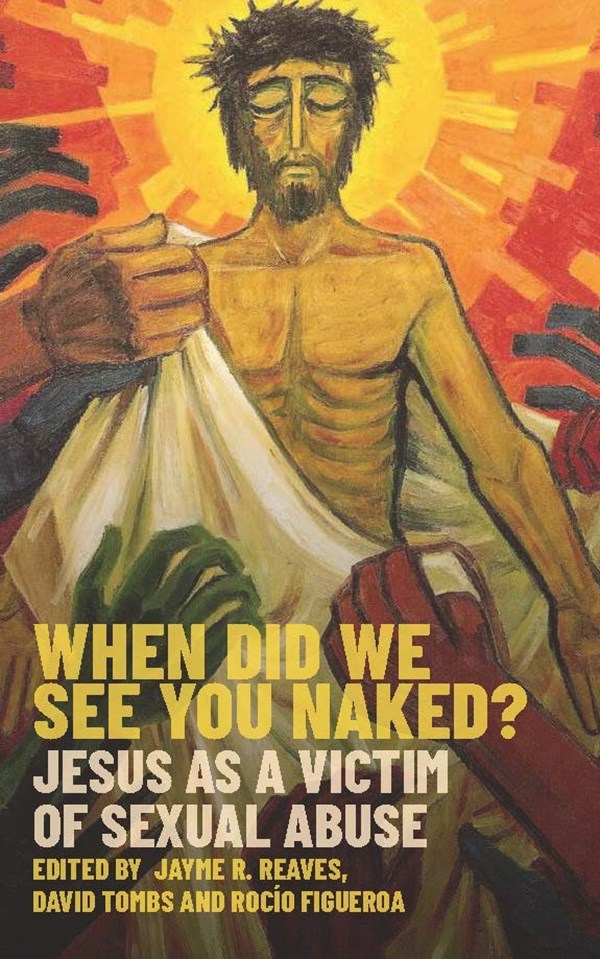 Jayme Reaves and David Tombs explain why it matters that we acknowledge Jesus as a victim of sexual abuse.

At the heart of this book is a surprising, even scandalous, claim: that Jesus was a victim of sexual abuse. It may seem a strange and implausible idea at first. This initial puzzlement is to be expected; the starting point and central focus of the book is both unusual and confronting. As the book shows, there is significant evidence that, at the very least, the forced stripping and naked exposure of Jesus on the cross should be acknowledged as sexual abuse and this has also been addressed in previous work (Tombs 1999[i]; Edwards and Tombs 2018;[ii] Reaves and Tombs 2019;[iii] Tombs 2020;[iv] Figueroa and Tombs 2020[v]). However, this textual evidence has rarely been addressed or even noticed, and so the recognition of Jesus as a victim of sexual abuse is an unfamiliar perspective for most people.

We start by acknowledging this is a difficult and disturbing subject to address. Sexual abuse points to what is speakable – and what is unspeakable – in the suffering Jesus experienced. Yet we seek to speak of the unspeakable in the belief that it has potential for positive consequences and not just pain.

To say that Jesus suffered, and suffered greatly, is uncontentious. Jesus’ suffering is firmly attested in Christian faith as we know it. To acknowledge Jesus as a victim of sexual abuse, however, typically prompts a very different reaction: blank surprise, stony silence, scepticism correction, or even anger or offence. Some ask questions like, ‘Do you really mean that?’ Others say there is no evidence in the Bible to support such a claim. Some flatly declare, ‘You can’t say this!’

It is because of the resistance that we felt it important to put this collection together. A question articulated by a respondent to a recent presentation captured this issue succinctly: ‘If it is acceptable to say that Jesus suffered torture and crucifixion, why is it not acceptable to say that he was the victim of sexual abuse as well?’

There are several levels to this discussion: what happened, why people resist this idea, and why these both should matter. The stigma and shame that comes with being named as a victim of sexual abuse is one of the central concerns that we want to identify and explore in this volume. We believe that appropriately exploring these painful and difficult issues can lead to positive consequences for survivors of abuse, those who love them, for the Church as the body of Christ, and for the wider society in which silence about sexual violence has been accepted as the norm.

We have taken the words ‘When did we see you naked?’ (Matt. 25.38–40) from the parable of judgement as the title for this book. The parable of judgement does not suggest that Jesus was naked as he spoke, nor did he need to be for his teaching to convey his message. However, the words capture his shared experiences with others, and offer a question that should be remembered two chapters later. In Matthew 27, as the passion story unfolds, this question, ‘When did we see you naked?’ becomes more urgent and immediately relevant. The book title is intended to raise the question as to whether we see the naked Jesus in Matthew 27 and other texts or avoid what is in front of us. It is an invitation to reflect back during the passion narratives to the question asked in Matthew 25.38–40 with a new awareness of what was actually done to Jesus and a new sense of what he might fully share with others.

Contributors explore both Jesus’ historical experience of sexual abuse and the theological and pastoral significance that this might have today. We are not saying that sexual abuse is the only form of suffering that Jesus experienced in his trial, torture, and execution. It is not our intention to limit understandings of Jesus’ crucifixion in any way. Instead, our aim is to broaden the established narrative and to notice the gaps in the story that have heretofore been untold and/or unacknowledged.

What is presented here is not intended to shock. It is offered with a serious historical, theological and pastoral concern. Many contributors write not just as scholars but as people deeply committed to the Church in a variety of ways. They write with an awareness that the topic is sensitive. Breaking the silence around the unspeakable is fraught with risk of offence. However, keeping silent involves risk of a different sort. As Sarah Ahmed says, ‘Silence about violence is violence’. Silence risks acceptance of the status quo and complicity with how things are. Sexual abuse and sexual violence demand a response beyond silence. As survivors and people who work with them attest, breaking silence can be a first step to transformation. We hope and believe that this book will help towards this long overdue and vitally important theological conversation.

Order in March via our website for a special launch discount.

Dr Jayme R. Reaves is a public theologian and Co-ordinator at the Centre for Encountering the Bible at Sarum College, UK

Prof David Tombs is Director of the Centre for Theology and Public Issues at the University of Otago.

[ii] For Tombs and Edwards https://theconversation.com/himtoo-why-jesus-should-be-recognised-as-a-victim-of-sexual-violence-93677