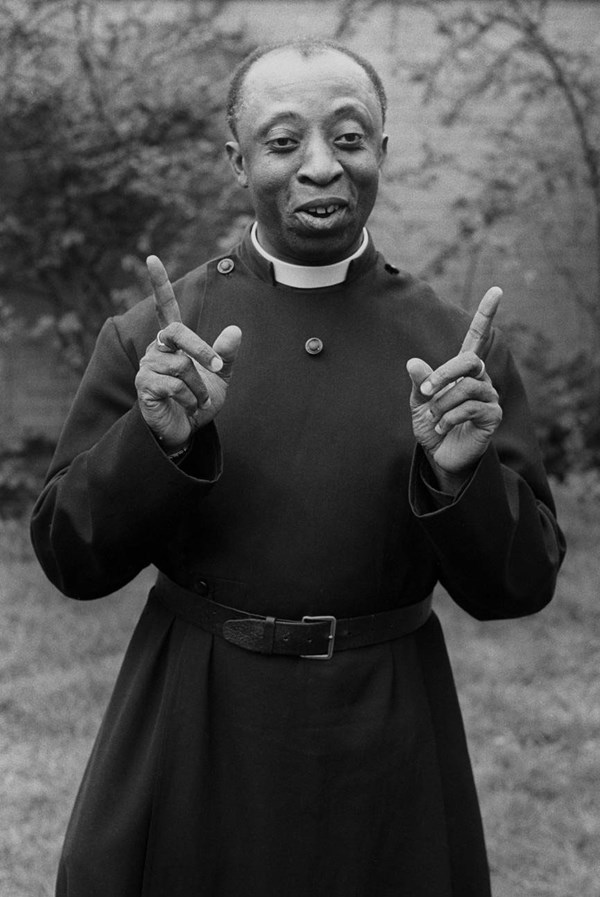 Last year, we published a blog piece by A.D.A. France-Williams on the life and legacy of Bishop Wilfred Wood. In case you missed it, we're re-posting it here.

Back in the late sixties a young black clergy man arrived on English shores from the West Indian Island of Barbados. He only planned on staying a few years. He saw prejudice was rife which deepened a sense of calling for him to be involved in ‘being the change he wanted to see in the world.’

He noticed black youths being treated poorly and at times criminally by law enforcement. He noticed bright young black people systemically and systematically prevented from mounting the first rung of the career ladder due to the bias. He witnessed the multiple barriers to housing for black families as they put up with abysmal living conditions and had little support from officials to fight their corner. The list goes on, he spotted the escalating debt as black families on meagre resources took loans with astronomical repayment schemes, which were tantamount to economic slavery. He saw a church with agreeable black people still so stunned from the shock of racism that they encountered shuffling in and out of their pews without interacting with their white peers.

He noticed that society was unwilling though not unable to make a difference to the lives of black people. He wrote about the issues with a curate colleague at St Stephens Shepherds Bush in a book called Vicious Circle. The insights they had were penetrating. He saw it as a gospel imperative to create what we call the kingdom, or to establish God’s shalom, a sense of all round wholeness and completion for person and place. After describing and identifying the problems he set to work on resolving them.

This man was called Wilfred Wood and he determined that he would source the funding for what he needed without a reliance on the existing social systems. So what did he do? He set up a fund to support black families in need, established a credit union to create sustainable ongoing income, opened Saturday schools to supplement education, formed a successful job club, and established a housing agency which is still going, and more.

It was all funded independently and so kept its sense of agency and power to affect change and work with a culturally appropriate worldview. Statutory funding had strings attached, was top down, bureaucratic and in many cases demeaning. He, on the other hand, always began with the dignity of the person or persons in need.

Over time, he founded what was known as the first Martin Luther King 12. This was comprised of a number key community leaders who met monthly to share the needs of their various sectors and share knowledge and expertise. It included a school headteacher, the director of a performing arts centre, providers of youth services and others. He was called upon repeatedly to be the UK’s Martin Luther King but he always refused that name. He said that it should be a people’s movement, each person claiming their own power. It reminds me of the aftermath of the feeding of the 5,000 story.

The crowd demanded Jesus became king. They attempted to crown Jesus by force. Jesus looked on them and saw they were like ‘sheep without a shepherd’, which can be also translated as, an army without a general. The would be king makers were most likely hotheads from Galilee who’d had enough of being under the boot of the Romans. In Jesus they saw a version of Messiah who would knock heads and put them back in charge of their own destiny. I wonder if Wilfred was afraid of the fervour of the unsettled and deeply troubled black community. There had been unrest and uprisings in urban communities, could it spill over into revolt?

At this point in his ministry Wilfred leant more towards the church and was a founder with others of ABC - The Association of Black Clergy. This was an ecumenical network of around 200 clergy of BAME backgrounds. Through that platform and strategic friendships he rose to become a bishop in 1985. He was Britain’s first black bishop. I suspect he wanted a movement to scale up the astonishing endeavours he was the engine for. Technically, theologically, and theoretically it seemed the right move but he had not factored in that the rot of society’s racism ran through the heart of the church as well.

He was frustrated at every turn. His role in helping produce the Faith in the City Report demonstrates a desire to have three strands of the seminary, advocacy in the society, and a reformed synod, all working in tandem to combat racism wherever it was found. However, the church structure was unable to contain his bold ambition, he became trapped within the edifice through which he hoped to liberate others.

Within the synod chambers his voice felt too loud, too strident. He spoke about General Synod copying ‘slaveholder’s thinking’. That rhetoric was not easily swallowed and he was not applauded for that speech, though he was applauded for others. He was seen as disloyal. Thankfully, he had white allies who held up his arms - like Moses on the mountain, with companions either side of him as he oversaw the battles. For Wilfred two of those comrades in arms were Canon John Collins and Bishop Trevor Huddleston whose experience of engaging in the battles against racism in the South of America and South Africa respectively had sensitized them to challenging racism on UK soil.

He also had a hinterland, a place not visible to those who sat and simmered. He was connected to the African-American Episcopalians (Anglicans) network and he was also a part of the Afro-Anglicanism project which was a network of global Anglicans of African descent or diaspora. Both of these groups specifically lent support to his efforts.

Seven years ago, I went to a Committee for Minority Ethnic Anglican Concerns (CMEAC) 25 year celebration. The previous Archbishop was there to help the BAME clergy celebrate. He began with an apology that he had another commitment and had to leave early. This was unfortunate as it sent the wrong message. The next speaker of note was Wilfred Wood now living back on his home Island of Barbados having retired. He was Skyped in and we could see him standing with the sea behind him. He is quite elderly now and we were waiting to hear his encouragement and for him to lift our spirits. But there were technical difficulties, there was a sound of a mighty rushing wind filling the microphone he was using.

We could see him, but could not hear him.

We need his voice more than ever today. Last year the Times newspaper reported Archbishop John Sentamu saying: ‘Racism is still a big issue in the Church of England.’ This statement made 16 years after Wilfred Wood retired, is devastating. Wilfred Wood desired to stamp racism out in society and synod, but now some who knew him would say he was exiled back to the Caribbean. And we miss his presence even now. I am glad John Sentamu spoke up, but he has now retired.

Who will pick up the baton, who will continue this vital legacy of calling the church to be the church for Christ’s sake? For as Christ said: ‘If you did it until the least of these, you did it unto me.’

A.D.A France-Williams is priest in the Church of England in an urban parish which is a member of the HeartEdge church network. He has been a priest for 10 years and holds a MPhil in theology as well as a Masters degree in Mission. His book Ghost Ship: Institutional Racism and the Church of England is published on 10th July, and available to preorder now.