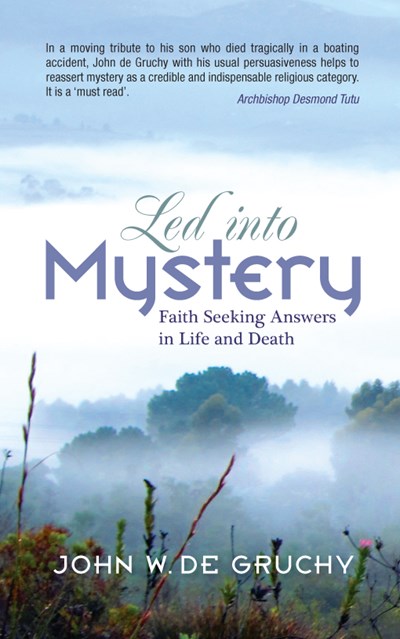 Join now Find out more
Publisher: SCM Press
ISBN: 9780334052913
Number of Pages: 256
Published: 31/05/2013
Width: 14 cm
Height: 21.6 cm
Description Author Information Reviews
Led into Mystery is an unanticipated sequel to John de Gruchy's book Being Human: Confessions of a Christian Humanist. It was prompted by the untimely and tragic death of his eldest son, Steve, in February 2010, and the questions this posed about the meaning of life and death from the perspective of Christian faith. A further prompt came as a result of a multi-disciplinary research project on "the humanist imperative in South Africa" (2009-2010). This raised critical questions about being human from the perspective of science, especially neuroscience, as well as other faith and secular perspectives. All these inform the discussion which is an exploration of mystery on the boundaries of human knowledge and experience, engagement with the world and the evolution of consciousness from a specifically Christian theological perspective. The title derives from Karl Rahner's comment that theology is about being led back into mystery -- the ultimate mystery of God disclosed in the life, death and resurrection of Jesus and the creative presence of the Spirit in the life of the world. This mystery is an open secret waiting to be explored, expressed and entered into by faith. In doing so, we discern the fragmentary mystery of being human alone and in relationship within the constraints of our time and space. We are rudely encountered by the perplexing mysteries of evil and death, but embraced by the mysteries of goodness and beauty, hope and love. We draw on memory and imagination to develop a language that enables us to explore mystery through the genre of myth, parable, poetry, the novel, music and art, we participate in the mysteries of faith that communicate grace, forgiveness, and freedom which enable us to be more fully human in the life of the world in the struggles for justice and peace.

John W de Gruchy is Director of the Graduate School in Humanities and is the Robert Selby Professor of Christian Studies at the University of Cape Town.

John de Gruchy is one of the leading English language theologians of his generation, an expert on Bonhoeffer, and well known for a wide range of theological writing. His son Steve showed every sign of stepping into his father's shoes. In 2010, however, he was tragically drowned in a diving accident. This book is the record of John and his wife Isobel's attempt to come to terms with his death, from the standpoint of their Christian faith, and in particular in terms of their faith in the resurrection. Moving and profound, it offers an account of how faith deals with tragedy without cheap consolation and allowing for the full measure of grief. -- Tim Gorringe This is a courageous piece of theological thinking, not simply because of the tragic circumstances from which it emerged, but also the intellectual daring that is so evident. John de Gruchy is an internationally recognised theologian, but with profound and unsettling questions spurring him on, he enters territories, poetic and scientific, in his demand for a faith that can stand before and in divine mystery. This is a compelling piece of writing and a great book. -- Graham Ward In a moving tribute to his son who died tragically in a boating accident, John de Gruchy with his usual persuasiveness helps to reassert mystery as a credible and indispensable religious category.It is a 'must read'. -- Archbishop Desmond Tutu This book had to be written. Gather a group of friends to discuss and ponder it. Steve de Gruchy, one of South Africa's bright lights, drowned at age 48. The tragedy and loss stopped his family in its tracks and forced a deep reexamination of Christian faith's most basic claims. Pushed and pulled into previously unexperienced depths of life and death, John de Gruchy, his father, set upon the hard, exacting theological journey, with Led into Mystery the result. Readers can only be grateful. Led into Mystery also had to be written because of science's challenges to religious truth, especially neuroscience. de Gruchy, keenly aware and respectful of these challenges to faith and the reality of death, faces them straightforwardly. Here, too, readers are the benefactors. -- Larry Rasmussen