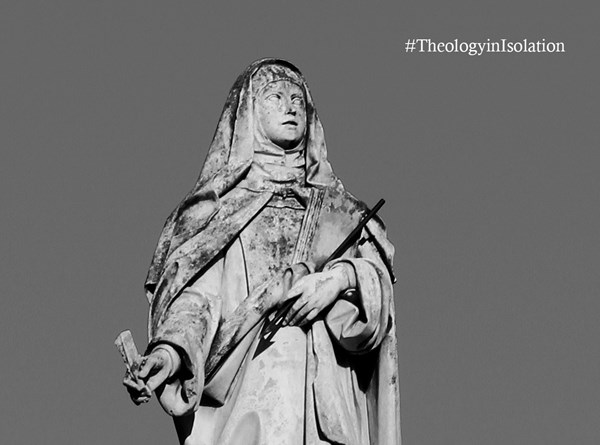 Gabrielle Thomas warns us to stop and think about context, before we rush to draw parallels between our situation and that of those in the past.

How many quotes, reflections, or articles have you glimpsed, since Covid-19 began, which draw on the wisdom of the early church fathers and mothers? Through my Twitter feed, the words of historical Christian figures have been offered up as means of help, wisdom, and encouragement - whether it’s Martin Luther on how to behave in time of plague; Theresa of Avila, or Benedict, on how to live in community, or isolation; or Saint Therese of Lisieux on how to suffer well - our saints have something to say. Now is the time to bring to the fore your favourite Christian from the tradition, if indeed, you have one.

My personal favourite, thus far, came to my attention through a course I’m teaching this semester, entitled ‘Evil in Early Christianity’. Evagrius of Pontus, a fourth-century monk, enriches our isolation through his writing on theology and prayer:

Against the thought of listlessness that is eager to find another cell for its dwelling place on the pretext that the first one that it had was very foul and full of moisture so that it got all kinds of diseases from it:

This tweetable quip comes from Evagrius’ book, Talking Back (antirrhētikos). According to Palladius, it is the third of the ‘sacred books’, following Praktikos (on prayer) and Gnostikos (on knowing God). The clue as to the book’s purpose is in its title; Evagrius wrote it to teach his followers how to combat demons, drawing on Jesus’ use of Scripture after his baptism, whilst battling Satan in the desert. Evagrius demonstrates his own knowledge of the Bible by employing no fewer than 498 verses of Scripture with which to combat demonic thoughts. He moves through themes such as greed, pride, and sadness. The quote above is aimed at the ‘Demon of Listlessness’; I’m sure many of can resonate with this, currently!

As a historical theologian, I am always on the search for treasures from the Christian tradition. I like this quote from Evagrius because it brings a little light relief to a difficult season; it has been all through Twitter and has put many smiles on faces, reminding us of something we already know, but which is helpful to remember: others have struggled in the past, and are struggling now, with feeling ‘cooped up’. We are not the first people to experience hardship and we won’t be the last.

So, why is it that I, as someone who believes that the tradition has a great deal to offer contemporary theologians, want to press ‘pause’ (‘pause’, not ‘stop’) on the way sources are being used during Corvid-19? One word: Context. We need to take care with how freely we distribute our treasures from the past because ‘context matters’.

Interpreting sources responsibly takes time. The ancient Christians depict a very different kind of lived experience, and if we overlook this, we risk losing in translation some important points, or making connections that an early Christian writer was not making. For example, Evagrius was writing about demons, not Covid-19. His isolation, and that of the monks for whom he was writing, was a radically different experience from the woman, in twenty-first century Great Britain, living on the 20th floor of a council block with six kids and a violent partner, who is about to lose his job and who can’t go to the pub. Reports of domestic violence have risen 25% in England in the past few weeks. Evagrius’ context was different. He exerted agency; he and his monks chose their lifestyle, and they were not, in fact, in isolation all the time. The monks to whom he was writing had the freedom to move around, as did Evagrius. They were not trying to raise a family, whilst continuing to work from home, or suddenly out of work, or homeless. Whilst it may be comforting, for those of us in privileged contexts, to draw on these ancient treasures, there will be many in our society for whom this luxury is not possible.

This same point applies to the plethora of writing which has appeared on my screen, these past few weeks, on how we should learn from monastic communities. Some years ago, I spent a year living in community with the Daughters of Charity of Saint Vincent de Paul. It was an experience I shall always treasure, and from which I learnt some valuable practices, regarding a rhythm of life, centred around prayer. Whilst I hold dear that period of my life, it was not at all the same as my current context, and I’m hesitant to make too many connections between my practice of prayer then and now. I was not working full-time as a professor and my family responsibilities were very different. Of course, traditions other than our own can teach us important lessons, but we need to be very careful about recognising some key differences in context and vocation. Public theologians and Christian leaders have a responsibility to take care how we disseminate our treasures from the past. Otherwise, we risk adding to the sense of failure that so many, struggling at home, are already feeling.

Theological reflection and learning takes time. Whilst our anxiety and activism may push us towards a desire for quick answers, let’s not plunder the tradition. Instead, take a moment to contextualise the intended learning so that listeners/readers may be encouraged, and not ashamed, during a period where encouragement is much needed.